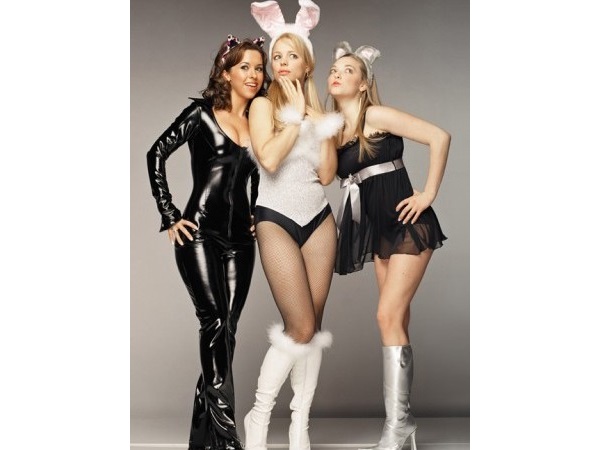 Anyone who has seen Mean Girls can remember Cady’s famous line, “Halloween is the one night a year when girls can dress like a total slut and no other girls can say anything about it.” Enter Regina George, smiling for her mother’s camera wearing nothing but lingerie and bunny ears, while her shocked father looks on disapprovingly and frowns. Regina’s minion Karen is dressed similarly in black lingerie and mouse ears, while Gretchen, dressed as Cat Woman, opts for a tight black body suit and cat ears. Cady, dressed as a scary zombie bride, is quite out of place at the party full of scantily clad teenage girls.

Since the release of Mean Girls in 2006, having “Slutoween” parties such as the one depicted in the movie has become common and widely accepted among teens. Meanwhile, debate rages on about whether or not sexy Halloween costumes for teens, especially girls, are harmless, liberating, degrading, or some combination.

At Country Day, fun, silly, and spooky costumes abound in the halls during Spirit Week and the Senior Halloween Walk. Although the dress code is relaxed during these times, students are still expected to follow the spirit of the dress code and wear appropriate attire. I’m talking about pressures I know many members of the student body experience outside of school.

For some teens, expressing their sexuality on Halloween can be empowering and liberating. Supporters of sexy costumes believe that women should be allowed to feel confident flaunting their sexuality and femininity without being judged or shamed for their choice of apparel. Tara Culp-Ressler, the Health Editor of Think Progress, noted, “Halloween has become, for many women, one of the only days of the year that they feel comfortable

really having their sexuality on display, really being overtly sexual.” For many, Halloween is just a night of harmless fun when teens can break out of their shell and feel confident about their own bodies.

Women feeling sexy, or having self-confidence is not the real problem with revealing Halloween costumes. An important issue is the immense social pressure placed upon teens to dress up in extremely sexual costumes, a pressure felt almost entirely by girls. Halloween costumes are highly gendered, and most choices for girls objectify their bodies in a sexual way. In response to a HuffPost Live segment about women’s Halloween costumes, @Mary_Betowt tweeted, “I’m alright with sexy costumes… as soon as they start making some for men, too.” While racy costumes constitute most of the choices for girls, boys have the option to dress up in costumes that are spooky, scary, or silly, but not necessarily revealing. According to gender studies expert Annalisa Castaldo, “Every costume becomes about the physicality of the body it reveals, not about the characteristics of the character being impersonated.” The objectification of women’s bodies apparent in many Halloween costumes teaches teen girls that their body is their most important asset as opposed to their intellect, personality, or character. This “over-sexualization” of teenage girls is harmful to a healthy self-confidence.

Recently, costumes suppliers such as Party City have come under fire from teens who desire more costume choices than just those of the sexy variety. That’s not to say that there isn’t a huge market and large demand for sexy Halloween costumes, with options ranging from a “Sexy Swashbuckler” to a “Racy Robin Hood”. However, in some stores where sexy costumes are the only option for teenage girls, it can seem like these are the only costumes society deems socially acceptable. There has been a Change.org petition to encourage Party City to widen the variety of costumes they carry to include modest costumes instead of just racy ones. The idea behind the petition was not to shame those who desired to wear a more revealing costume, but to provide more choices for those not inclined to do so, thus alleviating some social pressure to wear a racy costume by providing other alternatives.

Another controversial issue surrounding sexy Halloween costumes is the reason why many teenage girls wear the costumes. For some teens, giving in to social pressure and wearing a racy costume to gain approval from others seems like the only way to feel sexy. In other words, teenage girls are wearing sexy costumes not for themselves, but for the others. According to an article by Stephanie Rosenbloom in The New York Times, Deborah Tolman, a professor of human sexuality studies, found that “Some 30 teenage girls she studied understood being sexy as ‘being sexy for someone else, not for themselves’”. Feeling sexy is not a bad thing; the problem for many women is that their self-confidence only comes from others telling them that they are sexy.

Ultimately, the choice to wear or not to wear a sexy Halloween costume is very personal. For some women, wearing a sexy Halloween costume is a liberating way to have fun and express their sexuality without being judged. Some teenage girls even choose to wear highly sexualized costumes as a way to poke fun at society’s ridiculous standards and ideas about what is and is not attractive. For others, costumes are worn because social pressure makes it seem like the only way to feel sexy or self-confident. Although Halloween is over and the choice has already been made, take a moment to reflect about your decision. Ultimately, the question you should be asking yourself is, “Why did I choose to wear (or not wear) a sexy costume?” In the end, it really depends upon why you dressed up. Was it because of social pressure, or because you wanted to? Was it for yourself, or for others? In the end, the only opinion that matters is your own. So own it.