The 2022 Battle for the Soul of the Ohio Republican Party 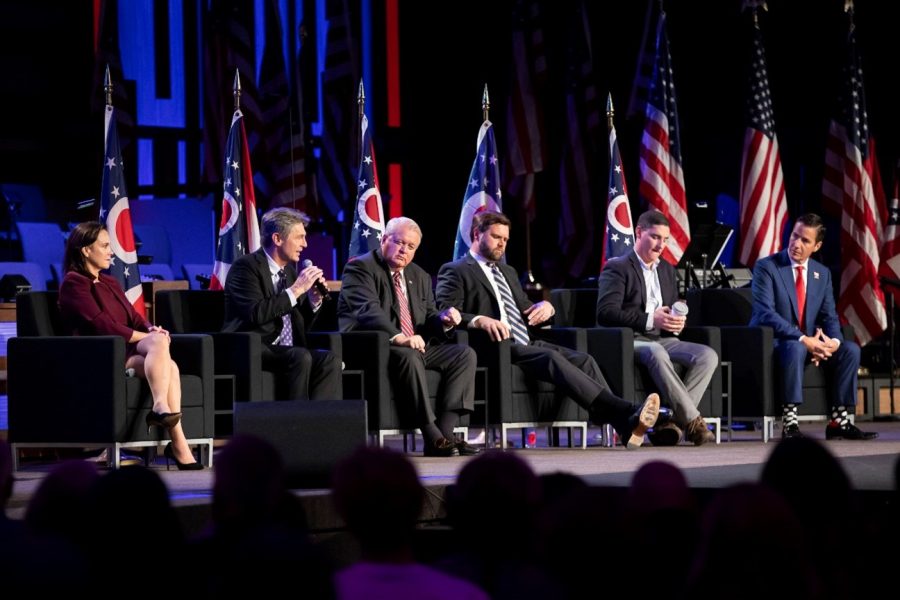 Since Senator Rob Portman’s January 25th, 2021, announcement that he will not seek a third term in the United State Senate, six major Republican candidates have emerged to replace him. Pictured from left to right, former Ohio Republican Party Chairwoman Jane Timken, Cleveland-area State Senator Matt Dolan, businessman Mike Gibbons, author and venture capitalist JD Vance, former State Treasurer Josh Mandel, and businessman Bernie Moreno are all vying to replace him. It would be an understatement to say that this Republican primary has thus far been the most brutal, divisive, and bitter one in recent memory. Operating under the shadow of Trump, five of the six candidates have exhausted themselves trying to claim the ‘Trump lane’ for themselves. Whether it’s “making English the official language of the United States,” as declared by Mr. Moreno, or proclaiming that, “America was founded and grew strong on a bedrock of Judeo-Christian values and we must remain vigilant in defense of those values against the secular left,” like Mr. Mandel, the majority of these candidates will stop at no lengths to prove how committed they are to fighting the culture wars of Trumpism instead of putting forward actual proposals to improve the lives of Ohioans.

Not to mention the fact that the main person they are all jockeying an endorsement from – former President Trump – incited an insurrection against the government and has continued to promote divisive and destructive falsehoods and lies about the 2020 Election. That doesn’t make a difference to these candidates. Moreno and Mandel have gone as far as to say they believe those lies. Other candidates have accepted or spread falsehoods about January 6th. JD Vance has claimed that “There are dozens of people who protested on J6 who haven’t even been charged with a crime yet [and] are being mistreated in DC prisons,” and that they are “political prisoners.” The January 6th rioters currently being detained are not, in fact, “political prisoners” who “haven’t even been charged with a crime.” In reality, every detained prisoner in Washington, D.C. has been charged with one or multiple crimes and has been deemed a threat to the public by the judges, thus why they have not been released. Timken and Gibbons simply refuse to acknowledge January 6th and continue to praise Trump. Mandel, for his part, has gone even further, claiming that he believes, “coronavirus, January 6th, the entire BLM and Antifa riots and looting… were organized operations… funded by Soros and liberal sources.” Promoting these lies is divisive, dangerous, and damaging to the honor of Ohio and our American democracy.

On March 24th, Gibbons, Timken, Moreno, and Mandel all sat down in a back room at Trump’s Mar-a-Lago in an ‘Apprentice-style’ meeting where the four of them desperately appealed to Trump for his endorsement by coming up with any and all ways they have supported him in the past and ripped each other for not being ‘loyal.’ It is disgraceful and sickening that these candidates who make outlandish and conspiratorial claims and will stop at nothing to show how beholden they are to Trump are treated as serious contenders for a seat in the United States Senate representing our great state and once held by the venerable Robert Taft, who would be appalled by most of the candidates running in this primary.

All hope is not lost, however, for Republicans to nominate a sensible and honorable candidate for this election. Cleveland-area State Senator Matt Dolan is a beacon among the darkness of the other five other major candidates. Senator Dolan, elected to the State Senate in 2016 but serving in state government since 2005, entered the primary in September. Former President Trump, for his part, remarked, “I know of at least one person in the race who I won’t be endorsing. The Republican Party has too many RINOs!” If being a respected public servant who has a proven record of passing legislation to help the citizens of Ohio qualifies as a characteristic of a ‘RINO,’ then that raises serious concerns about what the Trump wing of the Republican Party values in its candidates for elected office.

Senator Dolan is the only major Republican out of the six running who has said he would have voted for the certification of the electoral votes on January 6th and voted for President Biden’s bipartisan Infrastructure Bill, crafted in part by Ohio’s own Senator Portman. Beyond that, however, is his record. Unlike the rest of the candidates, Senator Dolan has numerous accomplishments to list on his record of championing all citizens in Ohio. For business owners and workers, he has “stopped a billion-dollar tax increase on Ohio’s small businesses” and “delivered a tax cut for every Ohioan in the 2021 Budget,” as well as being named a “Champion of Business” by the Ohio Chamber of Commerce in 2021. He has also fought to protect the environment by passing bills to protect the fresh water from the Great Lakes from going to waste and reducing phosphorus runoff in Ohio watersheds. To protect the healthcare of Ohioans, Senator Dolan co-sponsored a bill making healthcare more affordable and accessible in Ohio as well as helping to organize a task force aimed at fighting Alzheimer’s Disease and helping the families of those suffering from the disease.

The contrast between the major Republican candidates vying for the nomination and Dolan is stark. 20 years ago, all of them besides Dolan would have been laughed off of the debate stage. Representative Tim Ryan is the major Democratic candidate running and would make a fine Senator. However, given Ohio’s red shift since 2016, it is not a given that a radical candidate like Mandel would lose to Ryan. On May 3rd, 2022, any Ohioan who will be 18 on or before November 8th, 2022, can choose either a Republican or Democratic primary ballot at their polling place. If you will be taking a Republican ballot, I implore you to vote for Senator Dolan to save the soul of the Republican Party, at least in Ohio. This may be the last chance we have before sensible candidates like Dolan are the ones being laughed out of the party.