Two Years Ago, Today – Reflections on Meeting a Hero of Mine 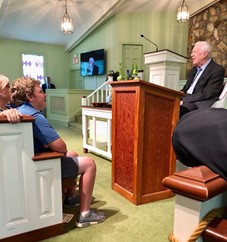 August 11th, 2019 will forever be, to me, of one of the most special times in my life, a time that I will never be able to replicate and an event so unique to the moment that I will never again experience anything like it.

The death of former President George H.W. Bush on November 30th, 2018 was the first time that I remember realizing that politicians from an age where people in Washington knew how to work with each other were disappearing quickly. I had always been interested in history and politics, but it took his death during my 8th grade year for me to truly realize how broken our politics have become compared to when men and women like former President Bush were in office.

To start at the top of my list, I decided to do research on a man who I had heard of but did not know much about, Bush’s predecessor, Jimmy Carter: the 39th President of the United States. In March of 2019, I began to research ways, if any, to meet or contact President Carter. To my surprise, I learned that he taught a ‘Sunday School’ at his Baptist Church in Plains, Georgia, every Sunday. To attend this Sunday school where Carter was speaking was incredibly easy. It was a first-come, first serve-basis for getting a ticket inside, meaning that some people showed up at (GASP) 3AM (!!!) the morning before to get ‘good seats’. Finally, for my birthday – which is very close to August 11th – my parents agreed to do a road trip down to Plains to go to his Sunday school. My parents knew close to nothing about this and had almost completely entrusted me to figuring out the itinerary of this trip. My parents rented a hotel room for my mom and brother, who most likely would not have wanted to get up at three in the morning to go to the church, and off we went.

Nine hours later, after finally arriving in Plains, we were greeted by many peanut-themed businesses and a large sign in downtown Plains that said “Plains, Georgia. Home of Jimmy Carter, Our 39th President.” I instantly became fascinated with the pride that the people of this small and remote town held for a hometown hero that made the journey all the way from nowheresville, Georgia, to the White House.

As we arrived at the hotel, the woman at the front desk told us that many people who stayed at the hotel left at insane hours of the morning to go to the church to get good tickets. We unloaded our bags in our room and sat down for dinner at the hotel. I asked after dinner whether or not we could swing by the church we would be at the next morning to see how many people may have already lined up in the lot. My parents agreed, and after dinner, we went to check out the parking lot. To my surprise, there were only two cars in the lot. I could not believe it. I had seen the videos with hundreds of people attending the Sunday School class, and here was my opportunity to get a front row seat at church. I knew that the only option would be to camp in the car overnight. I begged to do just that, but my dad and brother thought I was crazy. 3am was already going to be the incredibly early hour to wake up and head to the church. As we left, my mom spoke up. She said that she thought camping in the car would be the best way to get the best seat. After all, we were most likely only going to do this once.

During this debate, we headed to the supermarket in town to buy snacks and drinks for the next morning. I was the last one in the car from the market. When I got in the car, I learned that it was official: we would be camping in our car to see Jimmy Carter. By the time we arrived back at the church, it was 7pm. We had 13 hours to go until Sunday school began the next morning. As we pulled into the parking lot, we were the third car, and I was on top of the world. My dad dropped my mom and I off to save the space while he ran to the hotel to retrieve the luggage. When he came back, we turned on the A.C., hopped in the trunk to watch the Reds game, and prepared for the night ahead. When night did arrive, we rolled the windows down and got as good of sleep as we could. Luckily, there were no mosquitos, however it was incredibly hot, even at night. In the morning I ran into the woods to brush my teeth with bottled water and prayed that my hair looked okay.

At 8am the next morning, I was stunned to see hundreds of cars and people in the overflow lots of this church. We lined up with the secret service closely scrutinizing us, and entered the church. There were three people in front of us, and as we entered we got to sit in the first pew. The people that arrived before us moved to the far left of the pew while my brother and mom filled two more spaces, leaving me on the farthest right of the pew, next to the front aisle and about two feet directly in front of the podium where Jimmy Carter was to speak. As I sat down, I remember thinking that I could never have dreamed what experience like this was going to be.

I was correct. When President and Mrs. Carter entered the room, it was surreal to see two people standing right in front of me who had impacted our country on such a national scale. President Carter’s speech about compassion that day still inspires me. His incredible speaking skills for his age at the time, 94, were amazing and he never stuttered or lost his train of thought at any point. He was even making jokes during the service that I remember as well. While he was speaking, one of his relatives took a picture of me President Carter that I included above. When he finished speaking, I was stunned to see that President Carter’s seat was directly across the aisle from me.

Later, when Reverend Tony Lowden, the pastor at the church, got up to speak about compassion and loving your neighbor, he said to look to the left and right of you to recognize that everyone is human. Everyone in the church began turning their heads. I immediately looked to my mom on the left to thank her for the incredible trip, almost forgetting to turn to the right to see President Carter looking directly at me. I could not believe it. He thanked me for coming that day and said I was a nice young man. When the service ended, President and Mrs. Carter sat in a chair to take pictures with every family who came to church that day, including in the overflow rooms where the closest that the people got to Carter during the actual service was through a TV screen. During my family’s turn to take a picture with the Carters, I got to stand next to President Carter and he thanked me again.

As we left the church and hit the Plains gift shop, I spent the entire ride home processing what exactly I had just done. As I would soon find out, every decision I made on that trip could not have been more appropriate. With the Covid-19 crisis, our country was very fortunate that neither of the Carters, both in a high-risk group, got seriously sick or passed away. However, President Carter does not speak at the Sunday school anymore, meaning that if I had waited to go, I would simply be wishing that I had done it earlier.

As I think back to August 11th, 2019, I remember how lucky I was to have had such a special experience with a man like President Carter. Regardless of your politics, there is no denying that Jimmy Carter is one of the most decent men to have occupied the office of President of the United States. Before his presidency, he came out strongly against racism, even as a deep-South governor, declaring at his gubernatorial inauguration that, “the time for racial discrimination is over.” Post presidency, he has led global relief efforts to combat the Guinea worm disease and maintain election integrity in challenged democracies, both through his amazing foundation, the Carter Center. Here at home, he has been active in writing spiritual books and, even at 94, gone out to jobsites to build homes for Habitat for Humanity, whose mission is, “Seeking to put God’s love into action, Habitat for Humanity brings people together to build homes, communities and hope.”

President Jimmy Carter is one of the greatest men I know, and I am incredibly fortunate to have had that experience exactly two years prior to the time I am writing this: August 11th, 2021. I hope, for the sake of our country, that future politicians, humanitarians, athletes, businesspeople, and you will look to President Carter as an example of how to lead with compassion, integrity, and courage, and how to serve a purpose that is greater than just yourself.