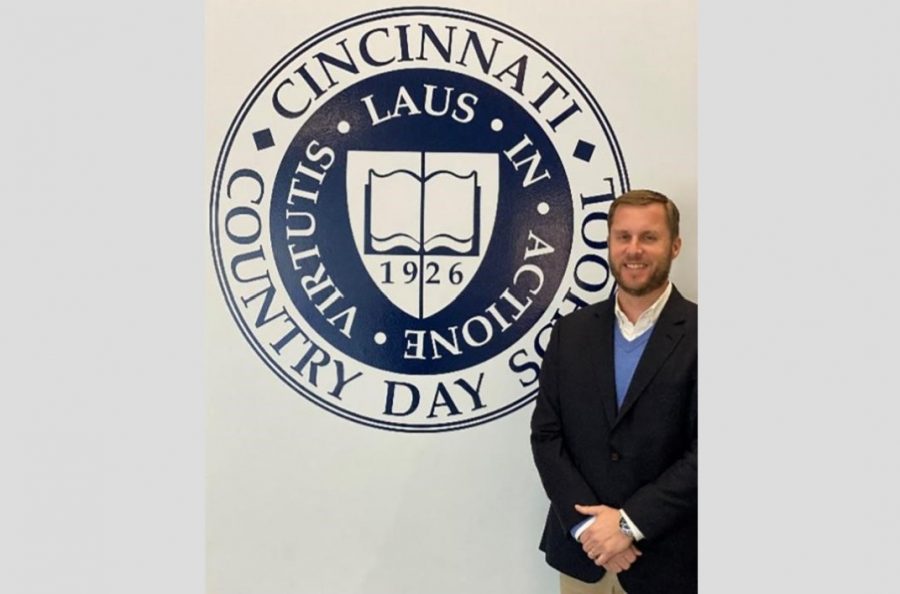 When Rob Zimmerman was a senior at Country Day in 1998, he loved taking a class from history teacher Merle Black on Hitler and Stalin. It was “clearly a college-level course,” he said.

“He brought out the book we were going to read which—he would kill me, I forget the author now—it was 3,000 pages, a doorstop of a book, and he fully expected us to read it, and we did, and it was fascinating.”

Mr. Zimmerman believes Mr. Black’s “contagious” passion for learning “fired [an] intellectual curiosity” within him and he’s been a “book nerd” ever since.

While it may be unusual for someone outside of the education profession to take the position of interim head, Mr. Zimmerman sees his more than twenty-year connection to the CCD community as an alum, trustee, and parent of a 5th and 1st grader as an advantage. “The hope is that I can maintain momentum and continuity because I already know the culture of the school… I don’t need to spend time learning what makes us unique; I can just roll up my sleeves and get right to work.”

But before any proverbial sleeve-rolling-up takes place, Mr. Zimmerman will be spending the summer “listening” to the board, faculty, administration, staff, and students to understand what’s important to the community and what the school’s “near-term priorities” will be. “I still have much to learn,” he assured me.

As a CCD student, Mr. Zimmerman wrote for the Scroll and played golf, basketball, and baseball. “I think the sense that I could do everything [at CCD] was important,” he said. “The culture… allowed me to take some chances and fail, just utterly fall on my face fail, and learn that that was OK and recover.”

One such failure occurred when Mr. Black loaned Mr. Zimmerman a book from his personal collection after his graduation. Despite the “huge influence” that Mr. Black has had on Mr. Zimmerman, he lost the book. “I was absolutely petrified,” he admitted. “I thought there was no greater sin on earth.” Thankfully, their relationship remains unimpaired by the incident. In a brief statement, Mr. Black fondly remembered Mr. Zimmerman’s “wry sense of humor” in class. “No scholar’s thesis went unchallenged!” he proclaimed.

While the school certainly has changed since Mr. Zimmerman was a student, I was surprised to discover how much things have stayed the same, (including Mr. Black’s hefty reading expectations). Mr. Zimmerman was also a physics student in Mr. Miller’s class, which he loved. Additionally, he credits Mr. Miller with helping him get out of “a bad Pink Floyd stage.” When asked about the incident, Mr. Miller noted, “Rob was a good physics student, despite his deplorable taste in music.” In Chemistry, Mr. Zimmerman claims he failed to “impress” Mrs. Butler. Mr. Dahl had recently arrived as a new teacher when Mr. Zimmerman graduated in 1998, just one year ahead of Mrs. Joyce.

With so many familiar faces around, it’s not surprising that Mr. Zimmerman is excited to be immersed in the CCD community again. In our conversation, he spoke at length about the impact that Country Day friends and teachers have had on his life, even after graduating, noting that he was grateful to be a part of such a strong community. “Country Day people have always made the difference for me,” he said.

When I asked him what some of the school’s challenges would be in recovering from this past year, he first mentioned the “mental health” of the community. “It’s been a year that we have asked so much of our students and teachers,” he said. “I hope that we can continue to have an open dialogue on mental health issues.”

On the other hand, Mr. Zimmerman believes that “the value of the school has never been greater or more evident” than this year. “It hasn’t always been easy, it hasn’t always been perfect, but we have risen to meet the challenge,” he said. “That ought to give us confidence going forward. There’s probably nothing we can’t do if called upon to do it.”