Theater during the Pandemic 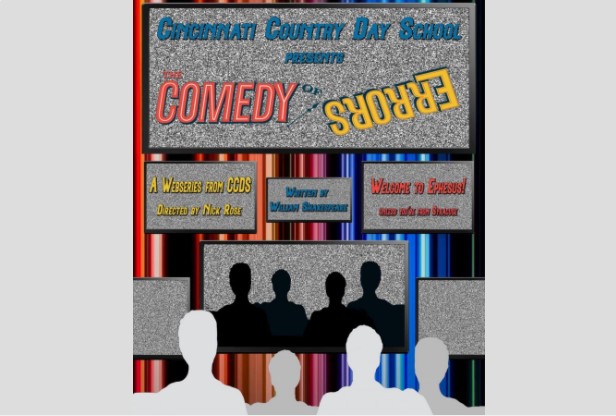 Although it’s a new year, nothing is back to normal. COVID-19 continues to affect our daily habits as we wear masks and social distance. Most of us probably don’t remember the last time we went to the movies or a play. With this year’s play, you don’t even need to leave your house!

Mr. Rose and Mr. DiTullio began their hard work at the beginning of September when they selected a group of students to participate in this year’s theater production. They settled on  “Comedy of Errors”, a 5 act play written by William Shakespeare. All students were invited to sign up to audition for the play or interview for the crew. A few days after auditions, the students got a list with their roles. The team met immediately with the goal of to starting filming as soon as possible.

Of course, to film a play we needed a set!  Mr. DiTullio’s and a motivated building crew began screwing wooden boards together to form the walls. Justin Puckett, the head of the crew, made every effort to accomplish the set constructions as Jessica Rutherford, stage manager, planned the production. The second group to begin their work was the painting crew, who took brushes and cans full of different colored paint to create the magical set. It is worth noting that the billboard turned out to be more challenging than expected. It had to be painted with no mistakes because it was supposed to be placed in the middle of the whole set. We have to thank Taylor Pavlisko for her wonderful work on the billboard.

Everything on set was finished at the beginning of December. Finally, it was possible to start filming. However, this also turned out to be a little bit of a bigger challenge. Due to COVID-19 restrictions, actors could not film scenes together without masks. The actors and directors innovated, and came up with the idea to shoot each actor individually. Although the actors’ schedules became very hectic, everyone was happy to work around the challenges and the set had a very nice atmosphere.

The filming still continues! The pandemic does not make it easy, but everyone tries to be as flexible as possible to cover missing people and just keep going. The light crew, lead by Connor Paff, the filming crew, lead by Spencer Rodenberg, and the sound crew, lead by Austin Vaughan, do a really great job collaborating with each other. Everything is controlled by the stage manager, Jessica Rutherford, or her assistants.

Of course, nothing would be possible without the actors. They have done an amazing job performing on their own in front of the cameras, which can be intimidating and difficult to say the least. Mr. Rose took care to do at least a couple rehearsals before taking shots, to help the actors to get familiar with the scene and their lines. The dialogues by the actor are spoken to Mr. Rose, who right after filming cuts the clips into small pieces and puts them together with the right other actor in the postproduction.

To get some more insider information on the play, I interviewed the man behind it all: Mr.  Nicholas Rose.

Laura: Why did you decide to film “Comedy of Errors”?

Mr. Rose: “We knew we were going to film a production before we chose Comedy of Errors.  Because of COVID, many professional theaters have been dark for about a year now.  Following their lead, we knew it would be safer to film a production rather than perform one live.  Filming also allows us to film an actor at a time, which also keeps the risk of COVID transmission down.  Mr. Jaccaci was actually the one who suggested that we break it up into episodes to air throughout the spring.  Once we had that idea in place, it was pretty much a lock.”

L: Did you consider any other forms for the play?

Mr. Rose: “Not really.  As I said above, I wanted to follow the protocols that professional theaters were observing.  A live performance was never in our consideration.”

L: Where does your interest in theater come from?

Mr. Rose: “I have been interested in theater since the 5th grade when I played Santa in Santa and the Snowmobile for Herndon Elementary School.  I never looked back.”

L: Have you ever worked with teenagers on doing any kinds of shows before?

Mr. Rose: “Yes.  For about 5 years, I was a counselor at Cincinnati Shakespeare Company’s Shakespeare Summer Camp.  I also long term subbed for a Theater Teacher friend of mine a couple of years back as well as directed a production for their school.”

L: How do you feel about being a director of this year’s play? What has your biggest challenge been so far?

Mr. Rose: “The biggest challenge has been finding out what we don’t know.  We are a great theater team here at CCD, able to overcome new skills needed to make this production happen.  The thing is, sometimes when you are doing something completely new, you don’t always know what is expected until it is needed.  Also, scheduling has been a bit of a challenge as our tech team is pretty much there every day we film and the actors are there once every couple of weeks.  It’s a whole new way of scheduling production.”

This year’s Comedy of Errors, Country Day’s first ever webseries, is a historical production. All of the participating students and teachers had to learn completely new skill sets and techniques. Even if you didn’t decide to get involved, you can watch the episodes of our show, which will be regularly posted on our school’s website. Hopefully all of you will enjoy this year’s production!