Where to Go From Here 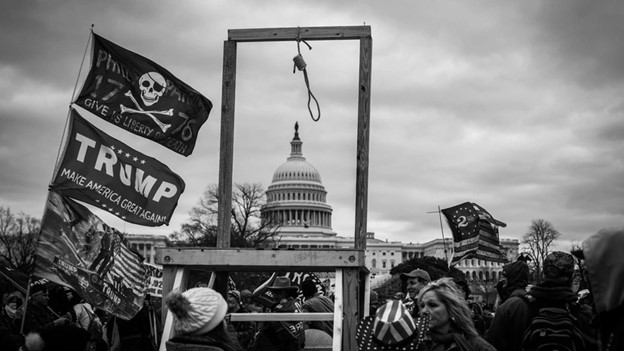 On January 6th, 2021, as the United States Congress voted to certify the results of a free and democratic election, chants of “Hang Mike Pence!” and “Where’s Nancy?” could be heard echoing through the halls of a building dedicated to preserving and hosting a government of, by, and for the people; a building built to be occupied by duly elected lawmakers and peaceful visitors and staff. Unfortunately, a violent mob, provoked by the former President of the United States and his allies, decided that the best way to ‘take back their country’ would be to violently storm and desecrate a sacred temple of democracy. If anything was to be taken away from that day, it is that our government is nowhere near as indestructible as it seems. What if the mob had gotten what it wanted, which was to hang Vice President Pence and shoot Speaker of the House Nancy Pelosi? Thankfully, due to the heroic actions of law enforcement such as Officer Eugene Goodman, the rioters never made physical contact with any lawmakers and were not able to carry out their ‘mission’ of holding a kangaroo court for lawmakers who they deemed ‘disloyal,’ executing any number of said lawmakers, and declaring Trump president for life. In such a scenario, one in which our government is held hostage by such individuals, I believe it would be appropriate to say that the great American experiment would finally have failed. The visions of individuals from all parties, races, and religions such as the Founding Fathers, Abraham Lincoln, Ulysses Grant, Frederick Douglass, MLK, Dwight Eisenhower, Susan B. Anthony, and others, who’s collective goals lied in wanting to move this country in the direction of a more perfect union, would have been tarnished, dishonored, and destroyed had the mob been able to accomplish what they intended to.

Unfortunately, the hardest truth of the entire affair is that the event was coordinated and provoked by a sitting U.S. President. It is unfathomable to suggest that a speech by a President who included the word “fight,” or variations of it, in his speech at least 20 times, did not provoke this. One particular quote from the speech was, “And we fight. We fight like Hell and if you don’t fight like Hell, you’re not going to have a country anymore.” If that sentence in and of itself does not sound like a violent call to action, afterwards, a close ally of the former President and fellow peddler of election fraud conspiracies, Rudy Giuliani, exclaimed, “Let’s have trial by combat!” After this rally, it became clear that there was no going back. Certainly a half-hearted video telling supporters to go home but also that they are loved would do nothing, if not simply act as a wink and a nod. To add to it all, it has become clear that the majority of the Republican party has sat idly by, unwilling to give punishment. A former Republican judge had this to say, “It’s not the party that I belonged to years ago,’ said Robert Byer, a former Republican judge and legal counsel for George H.W. Bush’s 1988 presidential campaign in Pennsylvania. ‘The whole notion that officeholders could impugn the integrity of the election in our commonwealth, it bothers me greatly. It bothers me as a citizen.” It is clear that the Republican party, one of two major political parties in our country, is quickly being overtaken by extremism, and the fear is that the Capitol riots are the beginning.

During the riots, a bust of former President Zachary Taylor had blood smeared on his face. This is an ironic symbol for the stain that January 6th, 2021, left on our history. That day will leave an ugly and, quite literally, blood-soaked stain on the fabric of our country that has been woven since our inception. I do believe, however, that there is a way forward. President Biden deserves a chance to unite us in moving past and condemning the Capitol attacks and beginning the healing process. Republicans, for their part, can move forward by disgracing Trump and his conspirators and taking back the Republican Party of Mitt Romney and Liz Cheney.

History will not judge Donald Trump kindly for what happened on January 6th. It vastly overshadows the positive achievements of his presidency, such as the USMCA trade deal or the various peace deals in the Middle East. The next few years will be indicators of whether our country and the Republican party can move on from the extremist and Trump-like wing of the party and back to the moderate and respectable Romney, Bush, and Cheney wing of the party. I believe that it is crucial to the survival of our American experiment that the Mitt Romneys, George Bushes, and Liz Cheneys of the party are successful in their reclamation.