A Review of October’s New Movies 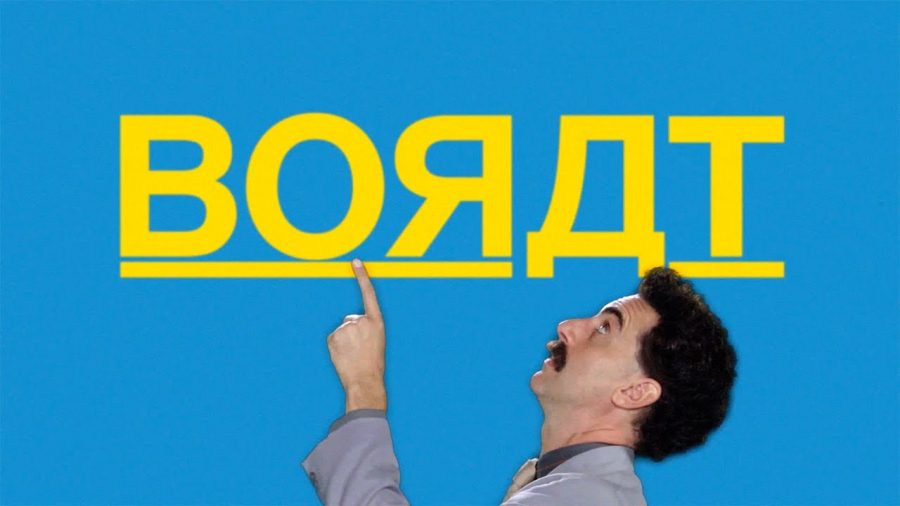 BORAT SUBSEQUENT MOVIEFILM follows Borat, played by Sasha Baron Cohen, as he returns to America to shine a spotlight on the election, Covid-19, and American culture in general. This time, however, Borat is accompanied by his 15-year-old daughter named Tutar, played by Maria Bakalova.

I think the genius of the Borat films often goes overlooked. With the large amount of generic comedies to come out of the 21st century, the first Borat film stands out as being one of the best. With its sharp satire and Sasha Baron Cohen’s profound ability to get real people to say the absolute worst things, the first Borat film brilliantly exposed the underlying racism that is still very prevalent in America. Surprisingly, BORAT SUBSEQUENT MOVIEFILM topped the first film in just about every way. It feels far more specific than the first, being hyper focused on modern politics and the election. One of the many plots of the film involves Borat trying to deliver his daughter to Mike Pence as a gift. Later in the film, his daughter becomes a journalist, which leads to her interviewing Rudy Giuliani. The way this scene ends is insane and is one of the many reasons to watch the film. When coronavirus unexpectedly hit, Sasha Baron Cohen lived with two QAnon supporters for about a week and remained in character for the entire time. It’s incredibly impressive and the end product is hilarious.

The reason BORAT SUBSEQUENT MOVIEFILM is better than the first film is because of Maria Bakolova as Tutar, Borat’s daughter. She added an unexpected yet very strong emotional weight to the film that made me feel more connected to the characters. Her and Sasha Baron Cohen had great chemistry together and made this experience so much more enjoyable.

There isn’t too much else to say without spoiling individual moments from the film. It’s a consistently funny comedy that also works as a relevant and informative satire with a surprising amount of emotional weight to it. Sasha Baron Cohen’s brand of comedy is certainly not for everyone, but I highly recommend it, nonetheless. You can find this movie on Amazon Prime Video.

ON THE ROCKS is about Laura, played by Rashida Jones, a mother of two daughters who is having a mid-life crisis of sorts. She feels like she’s in rut as a writer, while her husband Dean, played by Marlon Wayans, is becoming quite successful at his job. As Dean starts taking more business trips for his company, Laura starts to become suspicious that he is cheating on her. This sets Laura and her eccentric father, played by Bill Murray, on a mission to discover the truth about her life and her marriage.

ON THE ROCKS feels like an artistic misstep for Sofia Coppola, the director known for making great films such as THE BLING RING and LOST IN TRANSLATION, which also stars Bill Murray. She’s a director that usually packs her films with an unprecedented amount of energy and style, which makes this film even more curious. I find myself a bit confused to what Sofia Coppola was actually trying to do here. She is no stranger to exploring specific themes in her films that she finds relevant. With THE BLING RING, she explored America’s constant and dangerous obsession with fame and Hollywood and does so in a poignant and simplistic way. It’s not a film that relies heavily on its characters, but instead does the opposite and makes its characters shallow and devoid of much depth. But in its simplicity and its sporadic energy, the film becomes incredibly thought provoking and effective. ON THE ROCKS explores themes of aging and marriage. This film, however, feels like the polar opposite of THE BLING RING. With a film as laid back and as low energy as ON THE ROCKS, it’s enjoyment rides entirely on the subtle nuances of its characters, but unfortunately the characters Sofia Coppola has crafted are either poorly written or just plain boring. Bill Murray is one of the most charismatic actors working today and tries desperately to give this character life, but Sofia Coppola’s script prevents him from being completely successful. He plays Felix, the eccentric old father of Laura who believes to have a truly inspired insight into women and relationships, but, in reality, just comes off as derogatory. Felix is an interesting character in that it’s up to the audience to determine whether or not they like him. The viewer cannot make this decision, though, because Sofia Coppola doesn’t give the audience enough breathing room to decide. Still, I think the script is the most lacking aspect of this movie. The dialog is incredibly unnatural, giving Bill Murray virtually nothing to work with. The only interesting scene with Murray, perhaps the best scene in the film, is when Laura confronts his character for trying so desperately to save her marriage while being so unsuccessful at maintaining a relationship of his own. This scene definitely made me think about Felix as a character and drove home the overlying themes of the film in a way that felt natural, which felt like a rarity given the lacking script. Laura also isn’t a particularly interesting main character. She doesn’t have much of a personality and Rashida Jones, despite being a great actor, doesn’t bring much to this character. Marlon Wayans, of all people, ends up giving the best performance in the film. He’s incredibly likeable yet the audience never quite knows whether that likeability is a façade or actually genuine.

It’s necessary to question what Sofia Coppola was trying to achieve here. ON THE ROCKS isn’t a particularly good comedy, since the dialog seemed unnatural and awkward, and it’s not a good drama, since the characters are all either poorly written or bland. More than anything, this film is unremarkable, and not in the way Sofia Coppola might have intended it to be. There are low consequence films that still feel profound despite there not being much in the way of a plot. ON THE ROCKS just can’t escape this feeling of emptiness because not only does this film have boring characters, but the messages it tries to convey is forgettable. That’s not to say there weren’t aspects of the film that I admired. For example, Sofia Coppola has really stepped up her game in terms of visuals, an aspect of her directing that she has often been criticized for in the past. There’s a really visually pleasing scene in which Bill Murray is carelessly driving through New York. There are also some good attempts at cringe humor towards the end that paid off, and the ending was actually well handled and thought-provoking. Still, I found the film to be mostly mediocre, and unless you’re a big fan of Sofia Coppola I don’t recommend the film.