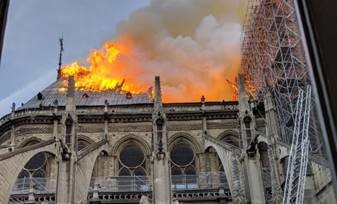 On April 15, Notre Dame, a cathedral dating back to 1365, was severely damaged by a fire. Just a month earlier, on March 23, Notre Dame turned 856 years old. The cathedral’s 300 foot spire collapsed, and two thirds of its roof were destroyed. The fire originated in the cathedral’s attic, which held dry wood beams that instantaneously burst into flames. The source has not yet been confirmed but was most likely caused by human error or an electrical problem. Recently it has been determined that fire could have been a result of smoking on site (which was prohibited) or a short-circuit. There are no signs indicating that the fire was an act of terrorism or foul play. Notre Dame had been undergoing renovations on the Church’s spire for months when it burst into flames. The safety planners obviously underestimated the risk of a fire and misjudged how easily and quickly it could damage the cathedral. In the event of a fire, the wooden beams in the attic were expected to burn slowly, allowing firefighters more time to combat the flames before the fire could do too much damage. The fire alarms in the cathedral were late to alert the fire dispatchers, and the first person to catch a glimpse of the quickly-burning attic was a security guard instead of a firefighter. The original safety plan for the fire included a 20-minute delay of the arrival of fire dispatchers. The built-in setback in addition to the faulty fire alarms delayed the firefighters long enough to do serious damage to the Cathedral. The oak with which the cathedral’s roof was constructed burnt faster than anyone could have anticipated, which investigators have attributed to the wood’s age. 500 firefighters worked to combat the blaze for nearly five hours. The fire, which started at around 6, had been contained by 11pm.

Notre Dame’s two towers were preserved but the roof of the cathedral and its main spire had been decimated by the flames. The people of Paris, who had expected Notre Dame to be completely destroyed by the fire, were relieved when they realized that a good part of the Cathedral had survived the fire.  President Macron promised France that the Cathedral would be rebuilt within five years. In the days following the fire, 845 million euros were raised for the reconstruction of the cathedral. The cathedral received hundred million-euro pledges from French millionaires, and companies and people from all over Europe and the world offered Paris their support. In an interview with NPR, French ambassador to the United States Gérard Araud explained the effect of the fire and partial destruction of the Cathedral. ‘Something really essential to my identity was destroyed,’ he said. Notre Dame was an integral part of the Paris skyline as well as its cultural landscape. Even in France’s modern-day secular society, Notre Dame was a reminder of France’s Christian roots. During the French revolution, hordes of people looted Notre Dame and publicly decapitated the statues held inside. The Catholic French, enraged by the all-encompassing power of the Catholic Church in Europe, attempted to strip churches of their religious symbolism. Notre Dame has survived much worse, and it will continue to survive.