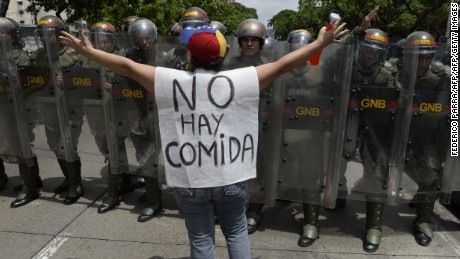 Venezuela is a country that has experienced corruption, inflation, and extreme poverty. There is currently a power struggle between Nicholas Maduro, the Venezuelan President, and Juan Guaido, who is currently serving as President of the National Assembly. In April 2013, following the death of his mentor and previous president, Hugo Chavez, Maduro was elected President of Venezuela with 50.62% of the votes.  He was re-elected to a second term in May 2018. This election is thought to be have been set up or rigged by Maduro, who not only banned two of the most popular opposition leaders from running, Leopoldo Lopez and Henrique Capriles, but also implied that anyone who didn’t vote for him would lose their government food subsides such as milk and rice. Such threats allowed him to gain the 5.8 million votes that resulted in his re-election. During his presidency the country went through serious hyperinflation. When the oil prices dropped and people didn’t have enough money, the government continued making more, which caused inflation by 1,000,000%. In August 2018 the government decided to discontinue their currency, the Bolivar Fuerte to create a new currency, the Bolivar Soberano. On February 3rd, 2019 Maduro refused to the EU’s request to call for new presidential elections, which caused many European countries to announce their support for Guaido. On January 23 Guaido declared himself interim president of Venezuela. The United States, France, and Germany have been supportive of Guaido’s leadership, whereas North Korea and China have announced their support for Maduro. The United States has attempted to send aid to Venezuela but Venezuelan authorities blocked the aid, thus preventing the Venezuelan people from getting necessities such as food and medicine.