Simply put, this season has been difficult. The team was very young and tried to fill the holes of last year’s dominating seniors. However, this article is not to bash the team but rather to look at the positive effects of a tough season.

For one, Matthew Adkins has taken control of the team and boy, is he dominant. Matthew has an innate ability to get to the rim, practically placing the ball in the net every time he drives in the lane. While this is considered a layup, have no fear, Matthew can also dunk at will. It is a spectacle to see the garbage teams of the MVC trying to guard him. Although Matthew is unstoppable on the court, he is very humble about his play and leads by action and the rest of the team follows. It was quite the learning shock to be alone without former captain and brother Blake, but Matthew along with rising junior TJ Moorman have accepted their role and are quietly ready to run the table their final year at CCD.

While Matthew dominants in the paint, it’s very nice to know he is not the only one. Mason Mack, brother of former football star Marek Mack has found his dominating in the paint. Mason is a very tall kid, and I use the term kid because while he is very good for his age, he still has a lot to learn. The role of big man has gone from Myles Jackson to Jack Gardner and now onto Mason, however, Mason is substantially younger than both. I am ecstatic by the fact that he is dominating as a sophomore. Working with Coach Waite has augmented his level of play and with the loss of Brice Hill at Seven Hills, I don’t believe there is anyone in the MVC that can match up to Mason 1 on 1.

The last two parts of the team are sophomore standouts, Franco Valentin and R.T. Adkins. While there isn’t much to say about Adkins as he went out during the middle of the season, he was a quiet scorer who made an impact on offense who will slowly move into a more substantial role this upcoming season. However, Valentin stayed healthy and people were able to see a dominating, designated shooter that could change the flow of a game in the blink of an eye. Franco, in my eyes, still has a lot of room for growth. He has a lot of potential and as he grows, his play will rise as well. 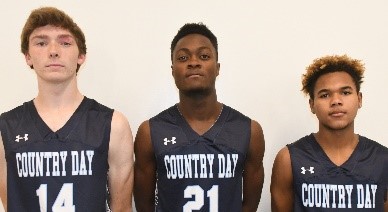 While the sophomores have a lot of potential, for now, it was good for them to get their feet wet in playing high-level basketball in atmospheres where almost every person sitting in the stadium is rooting against you you. So, experience is a killer in varsity basketball and CCD should be very happy that they are only losing 3 seniors.

With the loss of Brice Hill at Seven Hills, and Terry at Summit, I simply suggest that the MVC at least attempt to get ready for the Indians.

All pics from à https://twitter.com/CCDSCoachRoss/media