Gaming the Past: Interview with Dr. McCall 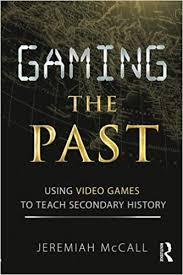 Due to his humble disposition, people may be surprised to learn that Dr. Jeremiah McCall, endearingly known as “Dmac”, is an internationally recognized expert in the field of Video Games and History. Through his interactive history classes, books, and,  website “Gaming the Past,” Dr. McCall has helped create a community of people who use video games to develop a deeper understanding of the past. In the last year alone he was cited fifty five times! This Saturday, January 26th, 2019, Dr. McCall will speak at Country Day Speaks and all interested community members can attend. Your Scroll editor-in-chiefs had the chance to learn more about Dr. McCall’s time in this unique historical field, and how video games are useful for much more than having fun.

How did you first get into using gaming for historical purposes, and when?

In 2005 I taught a simulation design class for seniors. At the time Civilization III was a popular simulation game. I realized that it was also a good model to learn from, so I had my senior elective class play it. Around that time I also attended an MIT games organization meeting, which further developed my interest, but I quickly found that not many high school teachers try to use games in their curriculum.

Why are video games a good learning tool to get people interested in history?

A lot of people have the idea that history is only about text, either verbal or written. I wanted to teach kids to be professional historians, but I believe that history is any communication of the past in any medium, even a game. Games can offer things you can’t get from just reading a text: they’re interactive and more immersive, it makes you think more about cause and effect and systems since you get to make choices and see what happens. While it’s not the only way to communicate history, it can be a useful one. Video games are also a popular medium. Not everyone loves formal history, but everyone loves history, whether they know it or not. People use history more than they think: they communicate past in many ways, like just telling stories, listening to musicals like Hamilton, or just showing a friend their instagram feed. I hope that interactive history can help everyone see that communicating the past is something we all do.

Tell us about your book, Gaming the Past.

In addition to everything I’ve already said, Gaming the Past shows that history is about making meaning of and thinking about the past. I’m not suggesting games replace texts, but they’re engaging and interactive models for thinking about how people operated and interacted in the past.

What are the long term goals you have as an international leader in using video games to study history?

1) I hope to form a broader organization, because there are so many people around the world interested in using video games to understand history, but right now we’re all scattered. An organization with conferences through which teachers can share ideas would be ideal. I also hope there are more sites like Gaming the Past. Most of my communication is through twitter and most of colleagues are European; I don’t know where my U.S. colleagues are, and I can only name three of them. So we definitely need more connectivity.

2) As of now, it’s difficult to find statistics of who’s reading or benefiting from my books, so I hope that data is improved in the future.

3) I want to help kids create their own games like Twine, but using a visual game design system.

As you also study philosophy, what philosophical issues arise when using video games to teach history?

There’s a couple of big philosophical issues: One is counterfactual history. The question is if there is value to what didn’t happen in the past, but could’ve happened. I believe that, yes, there is value to counterfactual history, but some people think that, if you don’t learn exactly what happened, you’re not learning history. In my opinion, history takes place in a human and physical context. If you’re going to argue that something was the main cause of something else, then you have to imagine what would happen if that first thing wasn’t there.

This topic raises another question: Is there an objective past? There are things that are culturally objective, but at the end of the day everything is perceived differently by different people, and all history is from memory. Games get into that. Then there is the issue of games straying from the past: How far from the past can they get, while still being legitimate because they’re objective?

What makes a game historical?

There’s some disagreement about this. Some would say any game with any connection to the past or that brings up past memories or ideas is a historical game. I don’t think that’s a strong enough definition for being able to use a game in classes, so I tend to go with the definition that to be a historical game it has to begin at a real point in history, and the historical environment has to impact the game. For example, Civilization begins in 4000, and the environment affects the civilizations you build. I don’t know exactly how I feel about a game like Assassin’s Creed, which involves a super secret society of assassins that are made up, but has historical settings and figures. In my opinion, the most important historical games are the ones where the designers actively think to give the players a sense of touching the past.

How are you using these ideas in the classes you teach?

In my 9th grade class, we use Civilization, which fits well with class since I redesigned it 2-3 years ago to follow four themes: government, inequity, human rights, and technology. For me it’s the best known ancient world history game since you can make choices such as changing your religion or acquiring new technology. However, in Civilization you exploit a lot and have unlimited growth. There used to be global warming, but the writers took it out because it’s not as fun. Now, your civilization continues to grow without consequence, basically making it so you need a Western model to succeed as a civilization. There’s also a semester-long Twine research project, where they have to research a historical figure and make a research project. Also we play Egypt: Old Kingdom, which shows that there are basic things civilizations need, and they then criticize how effectively the game portrays history. I consider my senior Interactive History class the culmination point of the work I’ve been doing. We look at different ways people represent the past through board games, video games, and Twine. If I had enough time, we would also go to museums to make it even more interactive. As Tara Copplestone, an archaeologist in England, said, we experience history as linear and fixed, saying this is what happened, but that’s not how we live life. We live life not knowing the consequence of our choices, but we study the past completely alien to how people experience it. Interactivity in theory gets us thinking about a world with situations and agents with goals that don’t know how it’s going to work out, which is closer to way the actual world is experienced.