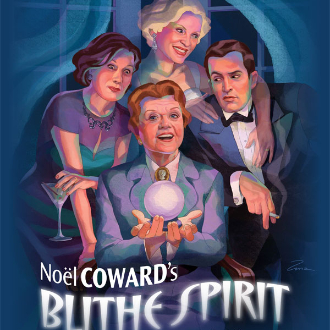 Blithe Spirit was the 2018-19 school play, and might I say, it was amazing. All the actors were powerful as their own characters, and the tech crew did an incredible job pulling off the special effects, sound, and lighting of the show. Each show night was different from the rest in its own way. Now time for a little background on Blithe Spirit itself and its different characters.

Blithe Spirit is a play written by Noël Coward set in 1940s England. The show follows Mr. Charles Condomine, an author writing a book about a “homicidal medium”, and his second and current wife Ruth dealing with the sudden haunting of Charles’ dead first wife Elvira. In the beginning of the play, Charles decides to invite Madame Arcati, a known medium in their town, and her assistant Nubs to perform a séance to get information for his book. He also invites his friends Dr. and Mrs. Bradman and their kids to watch over to watch and have some fun. During the séance however, something goes wrong and causes Charles to see and hear his dead wife Elvira. Throughout the show, Elvira is constantly trying to get Charles to leave Ruth, and Ruth is trying to send Elvira back to wherever she came from.

Ms. Bodollo has directed this show in the past, so she had a vision for it and executed it wonderfully. This show was one of the best shows we have pulled off at Country Day. Congratulations to all the actors and techies. We can’t wait to see you all at the upcoming musical, Chicago. As an actor on stage, I can tell you this was not an easy play to do. There were a lot of hiccups behind the scenes and in the making of this show. Problems varied from people being absent at practices to electric problems in the booth causing technical difficulties, but our amazing techies were able to fix everything. We love the techies because while the actors on stage performing, they are back stage doing ALL the work — they are the true heroes of the theater. This show is very difficult and is usually only performed in colleges or by professional actors. The fact that a high school was able to pull of such an amazing and difficult show so well just shows how strong our theater program is at Country Day. I would also like to say thank you to all the adults that helped, Ms. B, Mr. Ditullio, Keyla, Mrs. Paff, and Ben Justice. Thank you you so much for all of your help and guidance.