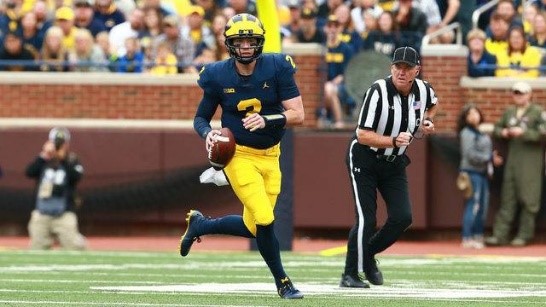 A lot of people that thought Michigan was overrated are siting to bite their words. It all started in the first game of the season when Michigan played on the road against Notre Dame, a battle of titans between two top-25-ranked opponents.

After the first quarter it was pretty clear who won the game, Notre Dame being up 14 to nothing. Michigan had some trouble starting their offense. The defense was burned for two touchdowns and now the wolverines had to fight themselves out of a 14-0 hole in south bend on the road at night. After the first quarter however, the game didn’t go too bad for the wolverines. Their defense played shut-down for the rest of the game. They were able to get after the quarterback but the game was already lost.

Michigan comes into week two barely surviving the top 25. It was a well-scheduled game against an easy opponent in western Michigan. After coming off a hard loss to Notre Dame, they came into this week with something to prove. It 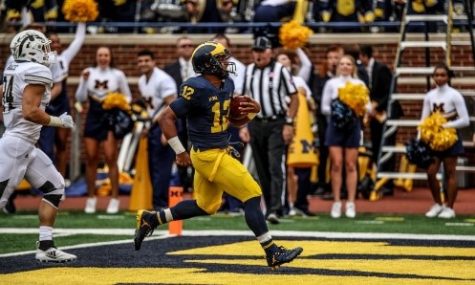 was an easy game with every aspect showing what they could do. The defense was spectacular, only allowing 3 points through 4 quarters. The offense outplayed the western Michigan defense with 125 yards through the air, with 4 touchdowns and zero interceptions. On the ground 7 players carried the ball for 308 yards and 3 touchdowns. The key to this game was starting out early, getting up to a 21-yard lead in the first quarter. They never looked back. Stars on offense like Donovan People-Jones and Nico Collins were slowly starting to show a resurgence of the passing game. 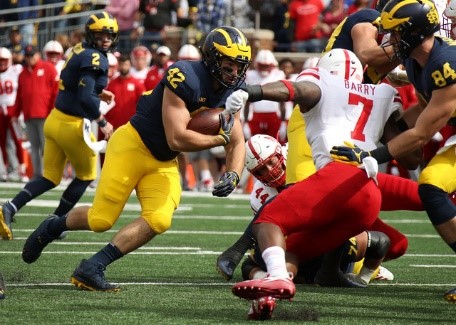 This trend continued into next week as the wolverines played lights-out defense against Southern Methodist, then continuing to head into BIG 10 play. The wolverines entered the week ranked #19. The Big 10 opener was against Nebraska, led by head coach Scott Frost. Frost made the mistake of calling out the Michigan defense and paid dearly, as his offense was only allowed 10 points through the final. The Michigan offense, however, continued to shine, putting up 56 points in a blowout. Ben Mason, the Michigan full back, is starting to emerge as the next great Michigan full back, scoring three times. Donovan Peoples-Jones also continued to shine, returning a punt for a touchdown. It was an all-around win by Michigan. 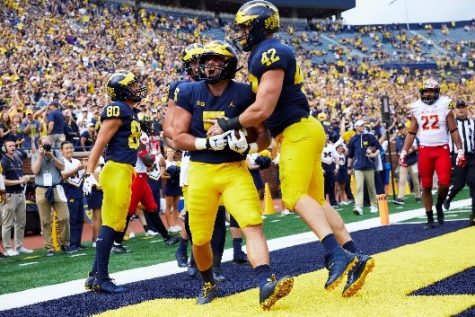 Northwestern and Maryland aren’t exactly hard teams to beat, but they do have good offenses and the Michigan defense shut both down. The next 12 quarters would decide the wolverine’s fate for the big ten championship and more. Wisconsin would be a hard challenge with Johnathan Taylor in the backfield but for some reason, he just wasn’t a factor. Maybe Paul Chryst wanted to establish his passing game but it definitely was clear that on multiple third downs, he would pull Taylor from the game. This along with absolutely amazing play from the offense led to a route of Wisconsin. And the sad part for Wisconsin is that Michigan wasn’t even playing fully healthy. 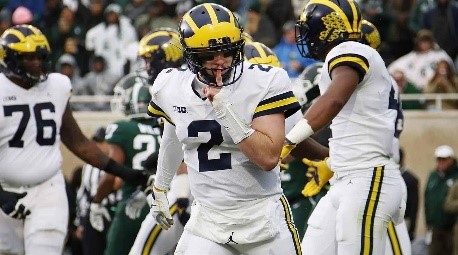 Michigan’s now sitting at #6 in the polls. Then came Little brother Michigan State and even though the game was ugly, the wolverines have shown that they can get it done when it matters. Emerging in the fourth quarter, their defense put their offense in positions to score which ended in a 21-7 victory. This game was incredibly important for Jim Harbaugh as the wolverines have finally beaten a ranked opponent on the road.  After the horrendous loss to unranked Purdue, that garbage team in Columbus is no longer atop the big ten.  Michigan sits at #5, undefeated in Big ten play with their only loss being to one of the last of the undefeated in college football, #3 Notre Dame. Michigan has quietly emerged onto the national stage building up their resume, shutting out opposing offenses with the #1 ranked defense. Michigan enters a bye week and then plays Penn State at home, who barely survived Indiana. Michigan is almost unbeatable at home in the Big House and Penn State does not have the offensive power to go against a stout Michigan Defense. As of right now, the Wolverines are 2-0 in the revenge path and they don’t look to be slowing down any time soon, especially not to James Franklin, a joke of a coach, and Penn State. If I were you I’d get behind the Michigan Wolverines as there are very few teams that can stop the Wolverines and Shea Patterson, while also battling the #1 ranked defense led by Coach Don Brown.