Rubio Retaliates: Trump and Rubio Battle it out 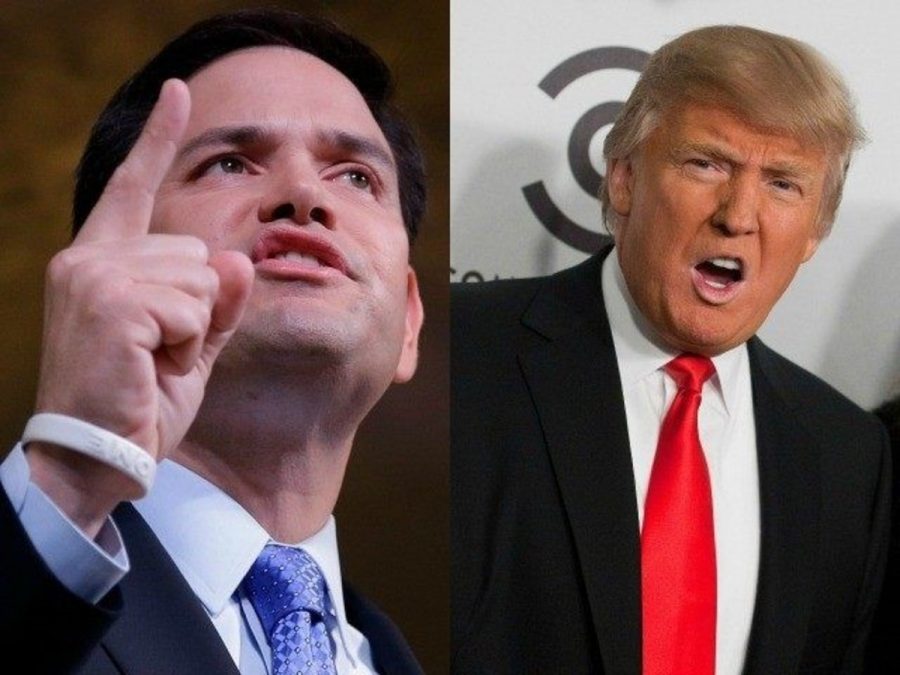 In the past two weeks, Donald Trump and Marco Rubio have been at each other’s throats. Their bickering came to its climax in Thursday’s Debate in Detroit. It was simply a back and forth between the two, with small interjections from Ted Cruz, while John Kasich seldom got a word in. Rubio and Trump said very little about their views, always finding a way to sidestep the moderator’s questions and attack the other. Cruz tended to take a condescending position from a high horse; stating his views while passively attacking someone. He also commented that the mud slinging must stop, and the Republican Party  must unify (behind him) in order to stop Trump from being nominated. Kasich, when he did speak was the only one who tried to state his views. He did complain (rightfully) that he did not get enough speaking time in the debates.

Rubio’s advisors must have advised  him to try to beat Trump at his own game. Unfortunately, Trump is unable to be flustered.  Rubio has attempted to get under Trump’s skin on several occasions. They have certainly been equally belligerent though. Some of Rubio’s strongest comments was, “If he builds the wall the same way he built Trump Tower, then he’ll be using illegal immigrants to do it.” InsultsIn an attempt to win more delegates, Rubio simply attacked the other candidates. Unfortunately, this strategy may be too little too late for Senator Rubio, as it seems no one can “trump” Donald Trump. Trump leads by 23 delegates, according to the FOX 2 Detroit/Mitchell poll.

It came as a surprise to many when Trump claimed that he would be more flexible  on illegal immigration “and other things.” He softened on his hardline approach, which thankfully, makes it less likely that he’ll build a wall. Trump was less of an aggressor in this debate and that is promising.

The belligerent attacks could be the reason for Trumps inability to dish out his own insults while defending himself from. He did get plenty of chances though to call the senator of Florida, “Little Marco.” It was clear Trump didn’t want to play the victim, but rather tried to defend himself from Rubio and Cruz. Trump clearly wanted to set the record straight on the

The sad thing about this? None of it is surprising. After such a low blow from Rubio, it is absolutely expected that Trump would respond in such a way.

Overall, we did not get a substantive debate. What we received what was more of an all-out middle school level clash. I came out of watching the debate no more enlightened on the candidates’ aptitude for the position than I was before.

It is all the more disconcerting that these men, who are used to diplomatic debate and graduated from the most prestigious universities in the world, cannot simply tell the country their policies, and based on this we, as a people, see who wins.

In this election, it is now commonplace and unsurprising to hear some of the nastiest attacks on one another, which is certainly a shame.