The State of the Union Is Not Strong 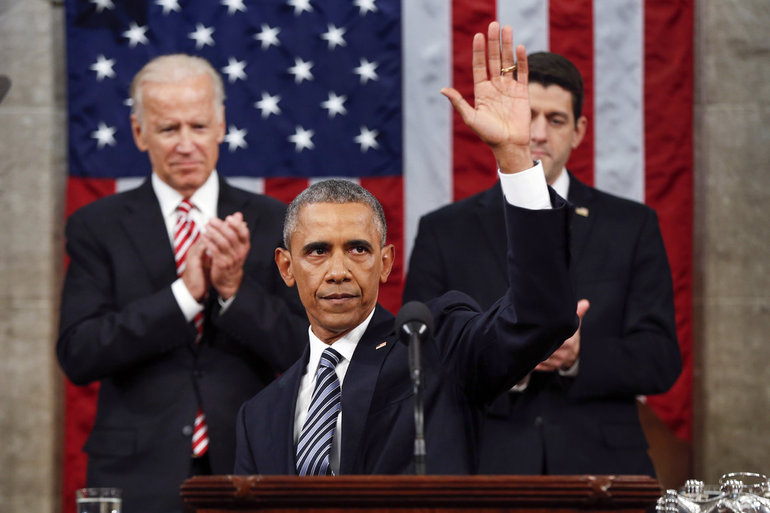 This past Tuesday, President Obama addressed members of Congress and the nation in his final State of the Union. The President’s speech – which lasted a little over an hour – emphasized his successes over the past seven years.

These successes included lowering the unemployment rate to 5%, reforming the health care system, reinventing the energy sector, bringing troops home, and securing the freedom of same-sex marriage in every state.

However, with an alarming increase in terrorism, a healthcare system characterized by higher premiums and more red tape, a global market on the verge of another meltdown, and a treaty with the Iranians that will likely provide the Mullahs with a nuclear weapon, the state of the union is not strong.

The President did not acknowledge any of these or many of the other realities facing the nation. Instead, he talked about party polarization and his unrealistic vision for the United States.

First, the President’s claim that terrorist groups, specifically ISIS, pose no threat to the nation is outlandish. Just this past Thursday, the terrorist group claimed responsibility for an attack that left seven people dead and 23 injured in Jakarta, Indonesia. Before that they inspired an attack in Philadelphia and claimed responsibility for the attacks in San Bernardino and Paris. With new attacks every week, from the Far East to here at home, it is entirely divorced from reality to say the radical Islamic terror group poses no threat.

Second, “Obama Care” is simply not working. The act aims to lower health insurance cost while providing widespread accessibility to all. Sounds good, right? Sadly for the President and the supporters of his bill, the reality is vastly different from the vision he so poetically painted on Tuesday. The fact is, the average deductible — the price you must meet before your insurance kicks in — is over $3,000, premiums have also increased, and the cost of expanding entitlement programs to subsidize others is staggering.

Third, the world economy is on edge. Despite the efforts of the Chinese Central Bank to manipulate market forces, their economy is sliding and there seems to be a halt in trading every other day. In Europe there are renewed talks of a British exit from the Euro. And in the U.S. the NYSE has lost over a trillion dollars in value in just the first two weeks of trading. Furthermore, commodities are trading at an all-time low, and economic theorists are warning investors that the global economy is showing similarities to the economy in 2008: only this time, with interest rates near zero, there aren’t as many levers for the Fed. to pull.

Lastly, our renewed relationship with Iran – cemented by the Iranian Nuclear Deal – which President Obama highlighted, is not a win but a serious strategic blunder. In fact, on the same night that the President made this grand pronouncement, the Iranian government held 10 U.S. sailors captive. Hardly illustrative of a partner serious about peace, the President is preparing, despite this most recent development, to continue charting a course that gives the Iranians a nuclear weapon, unfreezes their assets so they may finance terror groups across the region, and picks them as a strategic partner over our traditional allies in Israel and Saudi Arabia.

The president remarked that his biggest failure in the past eight years was the increased divisiveness and polarization of American politics. The problem, however, in America isn’t polarization: it’s a president oblivious to the problems listed above.

Clearly, the state of the union is not strong.