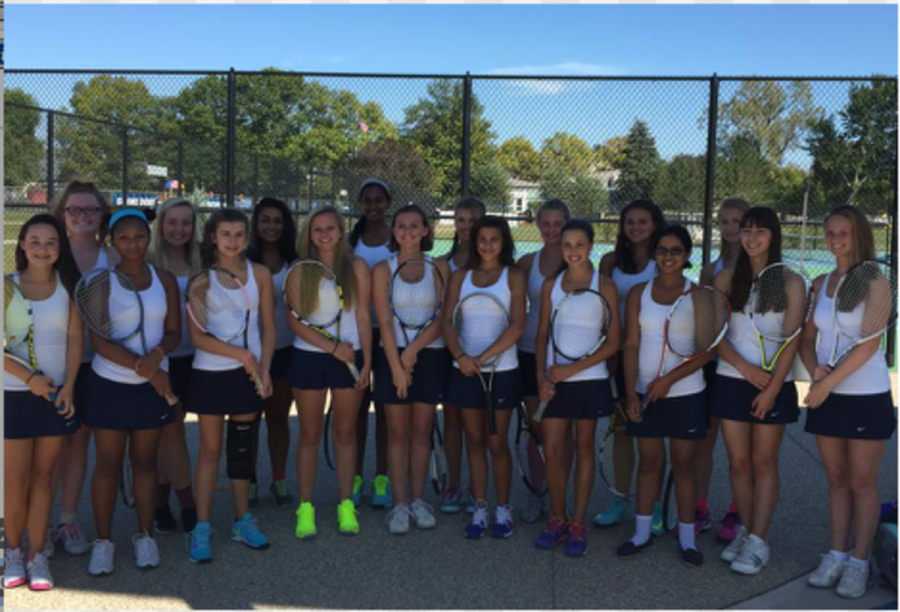 Focused and determined to improve, Country Day tennis players work hard after school each day on the sport they love. Laughing, dancing, and having fun in between points, this is a typical practice for the girls’ team. And that is what makes their team strong.

This season, the Cincinnati Country Day girls’ tennis team’s performance attracted great attention. Their doubles team of juniors Jordan Lutz and Katherine Alsfelder finished 2nd in the Sectional Tournament. In the GCTCA Tournament, Priya Chopra ’18 and Mia Masterson ’19 reached the finals of their respective draws. Though battling adversity, the team showed tremendous improvement from last year. Throughout this struggling season, there were many individuals who achieved big wins for the team.

I interviewed the coach of the girls’ varsity tennis team, Lynne Schneebeck. She gave some quite hopeful and positive comments about the team.

She greatly appreciated the effort of her team during the season. “They worked incredibly hard during practices and supported one another on and off the court. They showed great effort, sportsmanship and spirit. They are a positive and supportive group.”

According to Mrs. Schneebeck said, a tough schedule along with illnesses and injuries gave the team a lot of difficulties. Their match schedule included four Division I schools and eight top-ten Division II schools. However, their performance was satisfying as she said “They continued to compete and improve every single match. It was great fun to witness.”

I also had some positive responses from the team members. One of their players, Lily Hill ’17, said, “I had a lot of fun participating in the tournament with all of my wonderful teammates. Jordan Lutz and Katherine Alsfelder made it to districts while the rest of the team and I were finished with the tournament after sectionals. Although we didn’t make it very far, it was a very cool experience.”

One of the keys to success is how to get over obstacles and come back from setbacks. The loss of old players and addition of new ones is always a tough process each season for all high school sport teams. The girls’ tennis team did a great job this season with this task. When talking about how they made improvements from last year, Lily said, “This year, the girls’ tennis team had lots of new, experienced freshman. Although we lost some good seniors from last year, we were very grateful to gain these freshman.”

Also, Mrs. Schneebeck made the team bond over the season. She believed the JV and Varsity teams should do everything together, making a large team. Lily agreed with the way Mrs. Schneebeck guided their team, saying, “Most people think tennis isn’t a team sport but our coach, Lynne Schneebeck, makes sure we all feel included and are capable of playing together. The doubles teams are very good at working together and they have a strong connection.”

For Mrs. Schneebeck herself, it is always fun and meaningful to have her team bond together. “We also have at least one dual match where both teams compete at the same time…it is a fun and very supportive day! We are so lucky to have such a fantastic tennis center where we are able to offer this opportunity. We do fitness together, have a joint team day at the beginning of the season to bring everyone together and create a cohesive unit. Finally, we have our end of the year banquet together.”

At the end of this fall season, let’s applaud this young and energetic team, and look forward to an even better 2016 season!