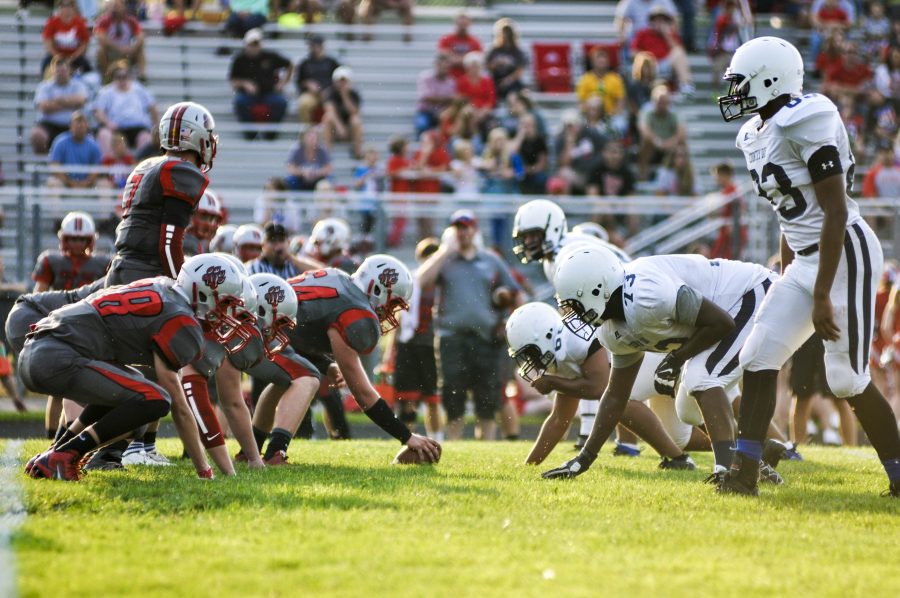 CCDS lines up on defense in their regular season opener against Bethel Tate.

The Cincinnati Country Day football team comes into the 2015 season looking to continue their tradition of winning. Dating back to the 2012 season, the Indians have won 22 consecutive games. Thus this season carries high expectations, but also a much tougher schedule and multiple new starters on both offense and defense. Last Friday August 28th, the Indians opened their season against Bethel Tate. They won fairly easily (38-14), controlling most of the game and earning their 23rd consecutive regular season win.

The Indians started slowly in the first quarter, producing little offense and no points. With Bethel Tate equally unproductive, the first quarter ended with a score of 0-0. The Indians hit their stride in the second quarter, easily scoring 21 points to take a 21-0 lead into halftime. The first touchdown came from a beautiful 37 yard pass from J’Quaan Waite ’16 to Nick Sam ’16. After that, Darryn Jordan ’16 ran in his first of the year and Waite threw another touchdown pass, this time to fullback Kunal Minhas ’16. The second half was much more even. The Indians added to their lead early with a 34 yard field goal by Sean O’Brien ’16 and a 4 yard touchdown run by Jordan. Up 31-0, the Indians let up slightly and Bethel Tate was able to find the end zone twice to cut the lead to 31-14. Stopping their momentum, Nick Sam capped off a great night with a 35 yard touchdown run to cement the 38-14 season opening win.

With all the questions leading up to week 1, many were answered positively Friday night. First, the Indians proved tough against the first of multiple larger schools on the schedule. Bethel Tate is a Division 5 school, whereas Country Day is Division 6. Second, the roughly 10 new starters debuted well. Quarterback J’Quaan Waite threw two touchdowns in his first game as a starter and showed great leadership and poise under pressure. The offense had zero turnovers. Additionally, a defense with five new starters forced four turnovers, often giving the offense great field position. Coming into this year, the Indians lost a very strong Class of 2015, containing multiple collegiate athletes. The team though never looked back, led by ten Class of 2016 players, who are quickly showing they too are a force to be reckoned with.

Contrarily, a few other questions had more negative answers in week 1. Penalties were abundant for the Indians on Friday. The least-experienced part of the team is the offensive line, with three new starters this year. While their lack of experience showed, they also were a major part of the 38 points scored by the Indians. With one game under their belt, they should be able to improve going into a five game homestretch in the coming weeks. Another question coming into the season was injuries. No one was seriously hurt Friday, yet Jordan, Sam, and Minhas, the three main running forces on the team, all went down at some point in the second half. It will be key for these three to stay healthy if the Indians want to be successful this year.

The regular season opener proved entertaining for the fans, informational for the team, and promising for the rest of the season. Of the game, Senior Captain Will Brady said, “We started slow and made lots of mental mistakes, but we made up for it in the second and third quarters by stepping it up on both sides of the ball. We knew we were the better team, we just had to play like it.” Fellow Captain Nick Sam added, “The team showed a lot of resilience and fight to turn it around in our favor. A lot of the seniors provided great leadership for us on and off the field. Hopefully we use this momentum for our big home opener on Friday.” They play Marion Pleasant, one of the toughest teams of their schedule, next Friday at 7:30 at home.